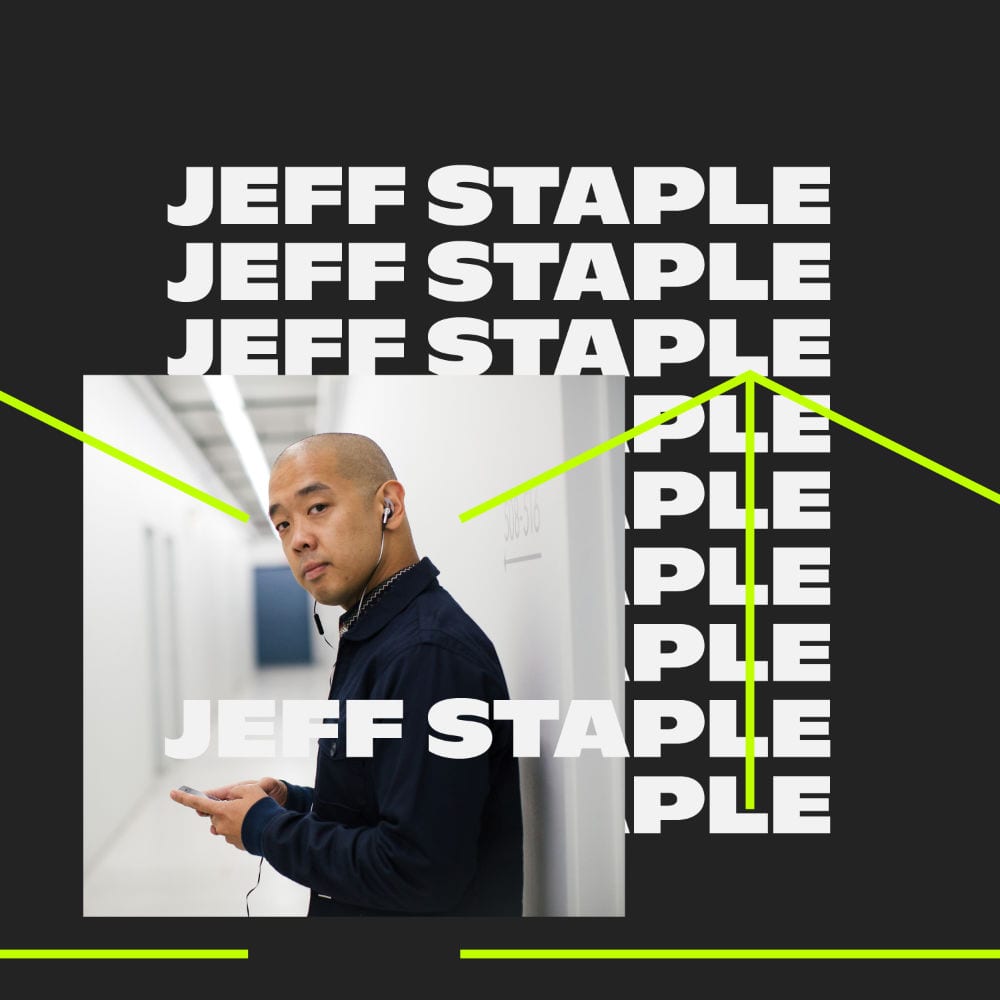 Jeff’s career in streetwear and youth culture spans over more than two decades. As he describes it: „If I can outwork people, I stay ahead.“ And he outworked a lot of people in this „niche field.“ Jeff is a designer by trade; he started different businesses. He is taking us on a journey along with his career, from the mid-nineties till today.

Jeff rarely took the front entrance. Most of the time, he needed to get through the back door to achieve what he wanted to do, „I am not that book smart. I don’t love rules.“

Looking back on his career, it feels it was well planned. But nothing could be further from the truth. Jeff took opportunities when they were there.

Jeff has been working since he was 13. When he wanted to spend money, he needed to earn it.

One of his many side jobs led him into a design agency where he needed to add data into their systems – by using graphic design software like Illustrator, Photoshop, and QuarkXpress. „This was the first time where I wondered if there was a career in this.“ That led him to drop out of NY University, where he studied journalism and join Parsons, one of the best design schools in the world.

His application was almost rejected: „When I applied at Parsons, I used my sketches from when I was 8 – 13 years old“. But Jeff found a way to get accepted. „This is a precursor to my whole career. Someone said you can’t come in here. Stop, you can’t come in. But I figured out another way in.“

His love for design led him to start printing his own T-Shirts. At night, at Parsons, as he was not allowed to silkscreen on anything else than paper.

„I wanted to start printing silkscreen on T-Shirts. But I was not allowed to do that. So another friend and I broke into the silkscreen lab.“

„Instead of putting art on a piece of paper, I thought to put it on a T-Shirt. Probably 10.000 people look at your T-Shirt, and that is a better billboard than a piece of artwork that is hanging on a wall.“

March 7th, 1997 influenced his way forward. It is not just Jeff’s birthday. The day that his wife got a new haircut and he strolled around Soho while waiting for her. At the Triple Five Soul store, the manager asked Jeff where he got his T-Shirt from: „This is my design“ was his answer.

„I had no entrepreneurial spirit, no dreams of owning a company. I was silkscreening T-Shirts and wanted to give them to my friends.“

The store manager ordered 12 right away. Jeff printed in secrecy and at night. The next order was already double the size, and Union started to sell his T-Shirts as well. Sometime later, someone from Japan called Jeff. He got his hands on one of his T-Shirts when he was in NYC and wanted to order some for his store in Japan. „How many,“ Jeff asked. „1000“ was the answer.

At this moment, Jeff realized: „OK, Jeff, there is a business here if you want it. If you don’t, you can hang up the phone and say thank you and go back and be a full-time student.“

„And I decided to pursue this brand thing.“

He decided to call his brand „Staple.“ „I wanted to call it Staple. The raw thing that you can’t live without.“

„My name is not Staple. It was actually the store manager who called me Staple, Jeff Staple.“ A name that stuck from that day.

In the aftermath of 9/11, Jeff needed to find a new location for his office. He stumbled over the site of what became an epicenter of streetwear in the 2000s: Reed Space.

The logo, the Pigeon, didn’t seem genius back then. „I loved brands that had animals in their logo.“ To him, it represents the typical New Yorker and everyone who wanted to make it.

„Everyone was „No no no,“ but I just wanted to do it, but it felt so right. This is the pigeon mentality of never giving up.“

Suddenly Jeff ran three businesses: his design studio, where he worked for other brands, his own clothing line, and his store.

2005 marked another milestone for him as a person, his brand, and his store: the launch of the legendary „Pigeon Dunk.“

Jeff explains how the Nike collaboration came about, how Nike reacted to its idea, and how it became a turning point in sneaker culture.

Of course, a lot happened after 2005, which Jeff talks about in this podcast and how he thinks Covid will change the industry.

Jump right into this episode and learn more about how Jeff stayed relevant in an industry that has seen many people and brands come and go over the last 25 years.

His brand Staple Pigeon and his agency Reed Agency Department.